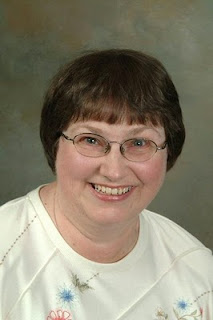 I'm pleased to have Susan Davis back visiting on my blog this week. She's giving away her new book, Crimson Cipher. Be sure to leave a post to be entered in the drawing.

1) Where are you right now (LVR, DR, Bathroom) and what are you wearing? You have to tell the truth.

I’m in my study and I have the ceiling fan on high. I’m wearing denim shorts and a lavender T-shirt.

2) What thing surprised you the most when you were researching World War I?

How much damage the Germans and Austrians did here in the United States before we ever got into the war. They bombed a bridge in my home state of , and I never knew about it until I started working on this book.

3) Many writers will say they see stories all around them. Is there someplace you found this story?

I’ve always loved codes. I was thinking of proposing a multi-book series about cryptographers, and I may still write one, but this story had to be told.

4) Do you have a favorite scene in this book and what would it be?

I like the ones where Emma and Martin are working on the ciphers and slowing cracking the messages.

5) Did you have to learn about ciphering in order to write this book?

Yes, I did. I built quite a library on the topic. In the book, I tried to keep it fairly simple while hinting at the complexity of the discipline.

6) What is something that very few people know about you?

I once climbed Arthur’s Seat in .

7) What is your favorite material item that you own (examples: ipod, Gone with the Wind book, grandmother’s rocking chair)

I'm hopeless and helpless with out them. 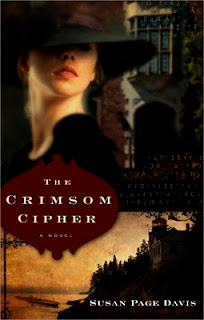 Emma Shuster’s father is murdered, leaving his secret encryption project unfinished. Since she worked with him, the navy offers her the position they’d hoped her father would fill—breaking ciphers. It’s 1915, and saboteurs are doing their best to keep America out of the Great War by bombing ships and factories and fomenting unrest among workers. Can Emma discover their plans and unmask their leader? Adventure and romance beckon as she joins a band of cryptographers trying to stop their enemies within the United States.

A man in a blue wool coat with epaulets on the shoulders and a peaked hat of the same hue approached the from the opposite direction. Navy, Emma concluded—a fine-looking officer. She looked away before he could catch her eye.

He reached the door of the brick building just as she did. “Hello.” He smiled brightly and opened the door for her.

“Thank you.” As she entered, she tucked the large envelope she carried under her arm, pulled off her knit gloves, and headed for the stairs.

She paused and turned toward him. “Yes?”

He unbuttoned his overcoat, revealing a uniform beneath. “I wonder if you could direct me to Professor Shuster’s office.”

Emma relaxed and smiled. “I’m just on my way up to see him, sir. If you’d like to follow me, I’ll take you there.” Her father was a Navy veteran. She wondered what the young man wanted with him.

He walked beside her to the third floor landing. The handsome stranger towered nearly a foot over her.

She supposed she should break the silence if she didn’t wish to be thought rude. “Several of the mathematics and science professors have their offices up here.”

“And you’re with the Navy, Mr. Patterson?”

They’d reached the door of her father’s office. Emma gave a quick knock and turned the knob.

“Father, I’ve brought someone to—” She broke off with a gasp. Her father’s slender form lay sprawled on the floor. Blood seeped onto the varnished oak boards and the papers strewn near him. “Father!”

She dropped her envelope and knelt beside him. Bending close, she touched his arm. The awful stillness of his body sent chills through her. A dry, fierce ache filled her throat. Pushing his shoulder slightly, she tried to speak again, but a sob wrenched her chest.

Patterson knelt on the other side and put a hand to the fallen man’s throat. After a moment, he reached across and gently touched Emma’s sleeve. “I’m sorry, ma’am.”

“I’m afraid there’s nothing a doctor could do for him.”

She wept then­­—great, hot tears splashing down her cheeks.

“Miss Shuster. Come and sit down.”

Emma raised her hand to her mouth, staring at the blood. She struggled to stand, but her knees buckled, and she grabbed the lieutenant’s outstretched arm.

He caught her as she wilted. “There, now. Let me help you.”

He turned a wooden chair to face the door, holding her upright with his steel-like right arm.

Emma sank onto the chair and held her hands over her face.

“Can I get you anything?”

He left her side, and she shivered. She wanted to look over her shoulder and see what Patterson did—to assure herself that she’d been mistaken and only imagined the ghastly scene.

A new sob worked its way up her throat. He touched her shoulder, and the weight of his hand through her coat was oddly comforting.

“We ought to call the police. Is there a telephone box nearby?”

“There’s a phone in the front office of this building, to the right of where we came in.”

“I’ll run down there and call for an officer. Will you be all right?”

She studied his face, wondering how he expected her to answer that.

“No, of course not.” He squeezed her shoulder lightly. “I’m so sorry. Would there be people in the other offices on this level?”

“Yes, probably.” She bit her lip. “Professor Fairleigh is across the hall, and Dr. Shaw is next door.”

He was at the door before she forced out a word. “Lieutenant—”

She wanted to say, “Take me with you,” but she didn’t. Even if she couldn’t make herself look at Father again, she couldn’t leave him unattended. She shook her head and clenched her hands in her lap.

His knocking on another door echoed in the hallway. The murmur of voices was followed by quick, heavy footsteps. Short, sturdy Dr. Shaw appeared in the doorway. His gaze pinned Emma to her chair, then shot past her.

He gasped. “Good heavens! Whatever happened?”

“We don’t know, sir,” Patterson said. “If you would be so good as to go down and phone the police...”

Dr. Shaw’s thick shoes clumped on the oak stairs. Far away a bell chimed, and the hubbub of students exiting their classes wafted up the stairwell.

Emma raised her chin and blinked back tears. Patterson stood ramrod straight, just inside the door, as though on guard duty.

“Thank you,” she said. Thank you for sending Dr. Shaw, and for not going yourself—but she couldn’t say that.

“You’re welcome. And if there’s anything else...”

“If you are a man of faith, Lieutenant, I’d appreciate any prayers you could spare this morning.”

“You have them already. Miss Shuster, I’ll help you in any way I can.”

Her heart ached, and a fresh stream of tears bathed her face. Patterson reached into a pocket and produced a spotless cotton handkerchief, folded and ironed into a perfect square. He placed it in her hand and pressed her fingers around it. For a moment, the warmth of his hand spread to hers.

“I don’t know what I’d have done if I’d walked in alone.” She unfolded the fabric and wiped her cheeks.

Be sure to leave your email address. Please check your junk mail on and the day after the drawing. I've had to redraw because of no responses. Subject box will have: winner of (book title). I'll email the winner and they'll have seven days to respond. If I don't hear back I'll draw another name. USA shipping only. Thanks so much and please stop back again! Drawing will be held Friday, August 6th.