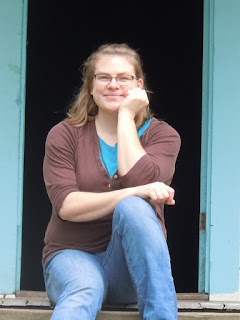 Be sure to read on down to learn how to enter in Sara's giveaway!

Camp Hope: Journey to Hope is the second installment in my Love, Hope, and Faith Series. It tells the story of Amy Dawson and her foster daughter, Mattie. Amy had a traumatic childhood, abused and then yanked from her jailed mother. Her life improved drastically when she was sent to live with her Aunt Zena on a huge farm in Briceville, Tennessee. Zena ran a summer camp for foster children with her best friend, Sam. Now that Zena has passed on, Amy has taken role as the director.
However, her scarred childhood has never left her. She is withdrawn and scared a lot of the time, especially of men. When Mattie is kidnapped and Amy is faced with the return of her high school love, Jack Evans, she isn’t sure how to handle things. The fear in her says hide. The desire to retrieve Mattie says be brave and go find her.
Amy’s motherly instincts win out and she delves deep into the mountains of Royal Blue. Royal Blue is a real mountain chain here in East Tennessee, part of the Cumberland Wildlife Management Area. It is thousands of acres of untouched wilderness, marred only by 4-wheelers paths that are like a maze of crisscrosses. It is home to bear, elk, rattlesnakes and copperheads, bobcats, coyotes, and more.
Amy stopped believing God cared about her when she was a young girl, and she gave up hope in any type of full healing for herself a long time ago. My hope is that readers will learn from Amy’s story. It is not only a story of loss and adventure, it is a story of reclaiming hope in God. Of realizing that no matter what has happened to you or what mistakes you have made, God has an abundant love for you and can provide full, complete healing.

GIVEAWAY: Ask Sara a question to be entered to win her Camp Hope. 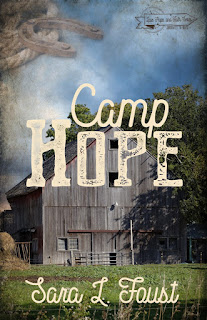 AMY DAWSON directs a summer camp for foster children near Briceville, Tennessee. A foster mom for the first time, her responsibilities as mother to a traumatized child bring a whole new set of challenges and joys.
But when Amy’s four-year-old foster daughter is dragged into the mountains of Royal Blue by a former employee, parenting challenges are overshadowed by a new nightmare. The Sheriff's department fails to procure viable leads, and Amy can’t sit idle. Her childhood friend and first love, JACK EVANS, returns to lend his skills as tracker. Problem is, he also stirs up romantic memories Amy would rather leave buried.
Jack struggles to let go of his past failures and prove his reliability by bringing Mattie home, but fears when he left camp nineteen years ago and failed to keep a promise to Amy he permanently lost her confidence.
As Amy plunges into the wilderness on horseback to search for Mattie, she must decide who she trusts, let go of her childhood traumas, and learn to rely on hope in God. Facing dehydration, starvation, and a convoluted kidnapper, will she succeed in recovering her precious foster daughter or get lost in the vast wilderness forever?

Author Bio:
Sara is a multi-published, award-winning author who writes Inspirational Romantic Suspense from a mini-farm in East Tennessee, where she lives with her husband and their five homeschooled children. She earned her Bachelor’s degree in Animal Science from the University of Tennessee and is a member of American Christian Fiction Writers. Her debut novel Callum's Compass won second place in Deep River Books' 2017 Writer's Contest. She also has a story, “Leap of Faith,” in Chicken Soup for the Soul: Step Outside Your Comfort Zone. Sara finds inspiration in her faith, her family, and the beauty of nature. When she isn’t writing, you can find her reading, camping, and spending time outdoors with her family. To learn more about her and her work or to become a part of her email friend’s group, please visit www.saralfoust.com.