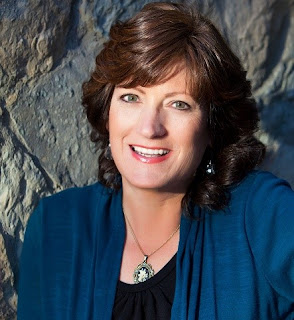 Please welcome Linore Rose Burkard to my blog this week. Linore is giving away a copy of Resilience to one lucky winner. To enter please answer ask Linore a question or answer one of the following. Do you worry about us facing EMP's why or why not? Are you a prepper? Why or why not. Don't forget to leave your email address.
Linore, you used to write Christian regency romance. What inspired you to write this very different series?
1. The PULSE EFFEX Series began when I was researching solar flares for a story idea. My research led me to EMPs, (electromagnetic pulses which can result from a strong solar flare), and then I discovered that it is totally possible for an EMP to wipe out our electric grid—virtually for the whole nation. It could happen in the blink of an eye due to a sun flare—or a terrorist attack. The implications of what life would be like in the aftermath just tugged at my heart. Most people are unaware of the danger, and are unprepared to survive if it ever happens.  But NASA and even our Congress agree that it can. So I wrote the first book, PULSE, showing what life might look like. It's entertainment , but with a lot of takeaway for the reader.

2. What do you mean by takeaway?
The book is saying, "Hey, this could happen, and you need to be ready." The takeaway is that it shows ways to do that, to prepare. I get letters from readers whose lives have been changed. They say, "I've started preparing after reading this book," or, "I've stepped up my preps." There's this perception that preppers are on the fringe, or paranoid. PULSE shows that in reality they are ordinary families like the Martins, whose closet or two of food storage ends up keeping not only their family alive, but other people as well. Readers see the life and death difference a little food storage can make, but also that it is something they can do. I believe that as Christians we are called to be prepared, not only for leaving this earth (by faith in Jesus) but also for earthly needs while we're here.

3. You've written two books in the series, PULSE and RESILIENCE. Now you're   working on the third volume, right? Yes, RESISTANCE. I'm roughly halfway through edits, but I don’t want to give away the story except to say that it reveals more about the characters, and goes deeper into what can happen in a grid-down world—but with hope.

4. Can you tell us about the second book in the series? RESILIENCE continues the story of survival for the three girls and their families that began in PULSE, but I was able to bring in a character named Roper. He's a wonderful guy, a youth minister before the pulse, killer handsome, but charming and with a great sense of humor. His specialty is one-liners, the kind a stand-up comic would use. Some of them are groaners, but his humor brought a lighter note into an otherwise dark situation (which continues in the next book, Resistance).  He's a love interest for one of the main characters, which was also a way to bring some light into a dark scenario.

5. Would you share some favorite bits of dialogue from the books?

Sure. In PULSE, 16 year old Sarah confronts her brother Richard, who has learned about EMPs  at college and realizes the deadly implications. She says,


"I can't believe this. It's only been a day without power and everyone's


acting crazy!" Richard plopped down next to me, opening the apple pie he'd


managed to get while McDonald's was being looted.


"That's because everyone knows this is bad."


I still didn't want to believe that. "How do you know for sure? What if the power comes back later today or tomorrow?"


He looked at me sideways, chewing. "It won't."


"Because it's not just the electric, Sarah. It's everything. ALL electronics. It's not


just a power outage. It's a catastrophic thing, like I told you, an electromagnetic


pulse. It affected everything that's electronic, and that's why people are freaking


out. When you can't turn on the news, or drive anywhere, or heat your house or


go to a store to buy more food, people WILL panic."


I took a shaky breath. "How long do you think it will last?" My mother came into


the room carrying Jesse. She'd heard my question and looked at my brother,


Richard was silent a moment, looking down and fiddling with the sturdy paper


From RESILIENCE.  I thought I'd let you meet Roper just the way Andrea does. Here's the scene, as they are about to engage with foreign soldiers who are arriving on the property in army trucks.


(Andrea) A man I didn't recognize was already crouched at the window. I'd heard someone new had joined the compound and figured this was him. My bipod was in position by the other window…I glanced at the man, who turned and nodded at me—and about did a double take. This guy was beautiful, possibly the best looking guy I'd ever seen in my life! He had thick, golden-brown curls that reached his shoulder, mesmerizing blue eyes, and a rough-shaven chin, probably the beginnings of a beard. He gave me an encouraging little smile but I was too astonished, taking in his good looks, to return it. So this was the new guy!


6. What accomplishment means the most to you?

What I'm proudest of seems to change as life goes on. At one time, it was graduating magna cum laude from CUNY (City University of New York). Then, like any author, I'm proud of my books; but what means the most to me is my marriage and family. The Lord graciously gave me a wonderful husband and five children. Relationships are the most rewarding thing there is.  Books will perish, all man-made things will one day be consumed, but people are eternal, and nothing matters more than eternal beings. People are what God cares about most, and what he calls us to care most about.

ABOUT LINORE:
Linore Rose Burkard wrote a trilogy of  regency romances for the Christian market before there were any regencies for the Christian market. Her books opened up the genre in the CBA. She also writes YA Suspense/Apocalyptic fiction as L.R. Burkard. Raised in NYC in a family of ten, she now lives in Ohio with her husband and five children. A longtime homes-schooling mom, she still schools her youngest daughter, preferably with coffee in one hand and her iPad in the other. Her latest PULSE EFFEX SERIES takes readers into a "chilling possible future for America."

Connect with readers:  Linore loves staying in touch with readers and offers a newsletter with book drawings, free PDFs, contests, illustrations and short articles. To keep up with Linore, get on the mailing list at either of her websites: http://www.LinoreBurkard.com, or http://www.LRBurkard.com 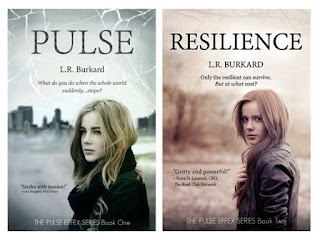 
When an electromagnetic pulse takes down the electric grid of the nation, three teenage girls and their families struggle to survive. Has the world collapsed forever? Who will survive when technology fails?


In this action-packed sequel to PULSE, L.R.Burkard  takes readers on a spine-tingling journey into a landscape where teens shoulder rifles instead of school books, and where survival might mean becoming your own worst enemy.
Posted by Debbie Lynne Costello at 2:30 AM