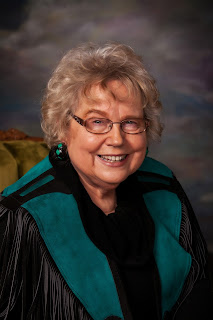 Please welcome Janet Chester Bly to my blog. Janet is giving away a copy of her book, Down Squash Bottom Road (choice of paperback or ebook). Leave a comment about Janet's post or ask her a question for a chance to win. Don't forget to leave your email address and if you are a feedburner follower be sure to let me know for an extra entry.

Horses play important roles in the Trails of Reba Cahill Series. While my late husband, award-winning western author Stephen Bly, knew way more about horses than I ever will, I enjoyed the research and gaining insight into who these animal characters were and what they might do in any given circumstance.

In Book 1, Wind in the Wires, black quarter horse Johnny Poe has always been hard to handle. But the heroine, Reba Mae Cahill, prides herself that she broke him when she was only sixteen. Her grandmother has no patience with him as he has thrown her more than once and stirs up her mares at the worst times. He got his name through Grandpa Cole Cahill who told stories of a gambler named Johnny Poe from the old days of gold mining. That Johnny Poe claimed to be a cousin of the writer Edgar Allan Poe.

The horse Johnny Poe has a backstory too. He is deathly afraid of barbed wire fences, though they surround the Cahill ranch. Reba knows the reason why. He was found as a colt next to his dying mother, gashed and twisted from withers to poll in a barbed wire fence. But she works with him to face his skittish fears, a part of their ongoing bond.

In new release, Book 2, Down Squash Blossom Road, Reba digs deep to find the courage to forge a relationship with her mom and escape a crazed man’s obsession. She also faces an uncertain future as horse trainer Soren Patrick offers her a new buckskin horse to replace Johnny Poe.  Perhaps Soren will also be a love interest. The buckskin he thinks so perfect for her could be the catalyst to the growth of their relationship. The buckskin also has a history. He served in Desert Storm, the 1991 Gulf War. This causes him to have a kind of horse version of PTSD. Soren believes Reba can help him overcome or cope with it.

In addition, in Book 2 I studied the actions of horses on the beach and around ocean waves. A stable in the story offers rental horses to guests for hillside trails and shoreline rides. Their chosen horses are good condition, well-trained Arabians, with their neat ears, widely spaced eyes, tapered muzzles, and aristocratic heads. But any horse facing the ocean for the first time or after a traumatic event could act out in uncontrolled ways. I wanted to know what to do.

I found out a beach rider must read a horse’s cues. Slowly approach the shoreline. Perceive how he reacts to the unique sounds and smells. Ride in dry sand and avoid water the first time. The next outing, try riding circles in the sand as you slowly move to the water with each circle. Prepare for startled reactions. Stay in shallow water. Go at low tide. Avoid crowds. Limit the pace to a walk. Watch for signs of the animal’s dehydration. Provide vitamins and electrolytes through salt or mineral block.

One interesting thing I learned is that many horses experience vertigo and may stagger when waves recede. The remedy is to aim to keep the horse steady as possible until the dizziness resides with reins and leg action.

What’s the most memorable horse character you recall from a novel you’ve read?

What Secret Lies Down Squash Blossom Road?
Cowgirl Reba Cahill’s schedule is full. Save the family ranch. Free her mom from a mental 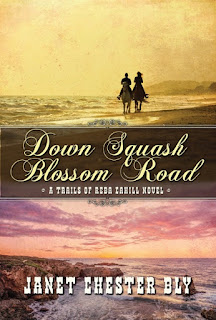 institute. Solve a murder and kidnapping. Evade a stalker. Can she also squeeze in romance?

Reba Cahill focused on the duties of the ranch, along with her widowed grandmother. But a crippled Champ Runcie returns to Road’s End in a wheelchair and seeks revenge for the accident that put him there. He blames Reba's horse. Meanwhile, a letter from her estranged mom forces her and Grandma Pearl back on the road: I can leave now. Come get me. Love, Mom

When they arrive in Reno, her mother issues a demand and refuses to return to Idaho. They head west instead. In California, Reba’s friend Ginny’s marriage is on the rocks. The family business is threatened. And squabbles turn deadly.

Reba digs deep to find the courage to forge a relationship with her mom and escape a crazed man’s obsession. She also hopes for a future with a horse trainer who offers her a new horse to replace the one she lost in the accident. But why does he have a photo of a pretty woman on his wall?

About Janet:
Janet Chester Bly is the widow of Christy Award winning western author Stephen Bly. Together they published 120 fiction and nonfiction books for adults and kids. Janet and their three sons finished Stephen’s last novel, Stuart Brannon’s Final Shot, a Selah Award Finalist. Down Squash Blossom Road is Book 2 in the Reba Cahill contemporary western mystery series. Book 1 is Wind in the Wires. Find out more at www.BlyBooks.com

Posted by Debbie Lynne Costello at 1:06 AM