The Seafaring Women of the Vera B. ends 4/18


The Seafaring Women of the Vera B.
By Susan Page Davis and James S. Davis

Giveaway details.
I will give away one copy, paperback or e-book; the winner can choose.
Debbie, please limit the paperback winners to USA residents. Thank you!

Blurb:
Our book is The Seafaring Women of the Vera B., set in 1854.
With the captain dead in Melbourne, Australia, Alice Packard thinks the worst has happened, until she learns the crew has deserted her husband’s ship in favor of the goldfields. Only one old man, Gypsy Deak, sticks by her, but Gypsy alone can’t raise a crew from the depleted population. In desperation, Alice turns to the only source of plentiful workers: the women of Melbourne. In a bold move, she and Gypsy empty a brothel, promising the escaped women a new life. Her all-woman (save one) crew put their backs and hearts into the voyage, but Alice finds training her sailors much harder than she expected. Her faith is tested to the limit. With a cargo to sell, angry brothel and tavern owners in pursuit, pirates to evade, and a mysterious stowaway, will the seafaring women of the Vera B. survive to tell the tale of this daring adventure? 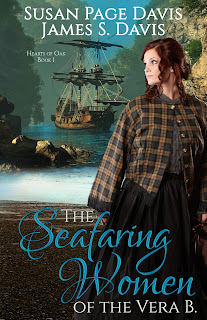 You wrote this book with your son, Jim. How did that work?
I had the initial idea for a sailing ship with a crew of all women. My son helped me pinpoint the time and place this could believably happen. We worked out the plot together during a holiday visit. We live almost 500 miles apart, so most of our communication after that was by phone or email. We worked our way through it, with each of us writing the scenes closest to our hearts. The research was a huge challenge for both of us, but we pulled everything together at last.

Many writers will say they see stories all around them. Is there someplace you found this story?
Yes, I was inspired by a true story. I had read about Abby Pennell, whose husband was a ship captain and died in Rio de Janeiro. She took the ship home. Of course, she had the original crew to do most of the work, but I wondered, what if the crew deserted her? Jim and I found the perfect situation: during the Australian gold rush, dozens of ships sat idle in their harbors while the crews flocked to the goldfields. Where would our heroine find a new crew? That was the big obstacle for her to solve. But once she found her sailors, more trouble followed.

Do your characters ever give you surprises when you are writing? Can you give us an example if they do and if they don’t do you know why?
Yes, they do. I thought Nell was going to cause a lot of trouble on the ship, but she turned out to be a valuable member of the crew. Ned, on the other hand, nearly got everyone killed. Didn’t see that coming.
Do you have a favorite scene in this book and what would it be?
I love the scene in the hold when Jenny discovers the stowaway. It’s a little scary, but it fits perfectly in this story.

What is your favorite time period to write in?
While I write both historicals and contemporaries, the late 1800s works well for me, especially 1850 to 1880. I love to tell about the simpler times, and it can be very helpful to a plot if communication and travel are slower than they are now.

If you could live in any time period when and where would that be and why?
I would love to visit Medieval days, but I don’t really think I would like living then. I’m too attached to my modern conveniences, better medical care, longer life expectancy rate, etc. But I would be thrilled to step back there for a week or two.

If you could visit any place in the world where would you go and why?
Jim has visited Australia, but I never have. I’d love to see some of the country there. I think a road trip through the Outback would be awesome.

What was the greatest thing you learned in school?
Mostly organization and meeting deadlines. My editors love those traits.

What is the hardest part in writing a story?
Getting everything right, especially in a historical. I’m always afraid I’ll miss something.

What is the funniest, strangest, or most interesting thing you have learned when doing research?
The many real shipwrecks around Australia are fascinating. We mentioned one in this book, but there are dozens that could be jumping-off points for a story.

BIOS:
James Samuel Davis is a writer who has traveled in Australia, China, Micronesia, and Alaska. He resides in rural Travelers Rest, S.C., with his wife and seven children.

Susan Page Davis, James’s mom, is the author of more than sixty Christian novels and novellas. Her historical novels have won numerous awards, including the Carol Award, the Will Rogers Medallion for Western Fiction, and the Inspirational Readers’ Choice Contest.