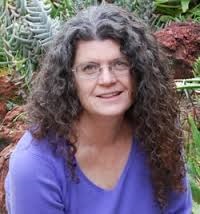 Please welcome Nancy Farrier to my blog. Nancy is giving away a copy of her book, A Cowboy's Bride so be sure to read on down to find out how to enter.

California’s Super Flood 1861-1862
In my latest release, Crazy About Cait, (The Cowboy’s Bride Collection), I give readers a look into the difficulties early ranchers faced during the severe drought in the late 1860’s, California. In my research, I came across an interesting bit of California history that happened prior to the major drought. I wanted to share that with you today.
By the fall of 1861, farmers and ranchers were praying for rain. They had been suffering two decades of little rainfall. Their lands and herds needed water. While the Eastern half of the country struggled with the devastation of the Civil War, California prayed for rain.
Those prayers were answered in a way those ranchers and farmers hadn’t expected. Beginning in December of 1861 and going through January of 1862, Californians faced four huge storms that dumped an unprecedented amount of rain. The storms occurred December 9th, December 23rd-28th, January 9th-12th and January 15th-17th. The latter storm was the worst of them all.
In early December 1861, the Sierra Nevada mountains, east of Central California, saw a snowfall of ten to fifteen feet. By the 9th of December, when the rains started, the temperatures had risen to 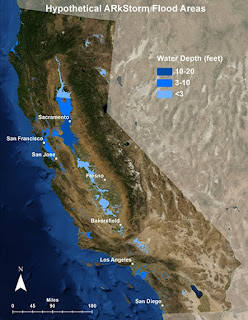 record highs for that time of year. The snow began to melt, running off the mountain into the valleys below.

In the Central valleys entire settlements were wiped out from the flooding. People, cattle, horses and other animals drowned in the fields as the water reached levels of 30 feet. Even the telegraph poles were submerged. Along the Yuba River, an entire settlement of Chinese miners drowned as their town washed away.

The day the final storm began in January, was the inauguration day, in Sacramento, for the new Governor, Leland Stanford. The rain that day came 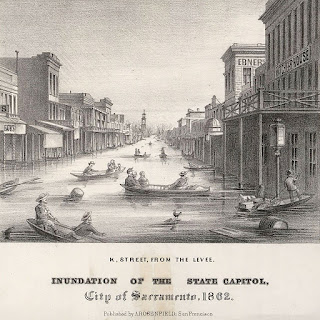 down so hard that some said a man could drown where he stood. Although the inauguration wasn’t cancelled, the ceremony had to be moved inside the Capitol building. The new Governor had to travel by rowboat from his mansion to the Capitol. The ceremony was shortened, but by the time Governor Stanford returned home, he had to direct the rowboat to a second story window to enter his home.
Throughout Sacramanto the flood waters were measured at ten feet deep. The banks of the river couldn’t be seen any more. The city remained under water for three months before everything began to dry out.
In other parts of California the rains caused landslides and mudslides that haven’t been equaled since. Homes, and sometimes whole towns were destroyed. Buildings were ripped from their foundations.
One of the reports said that 32 inches of rain fell in 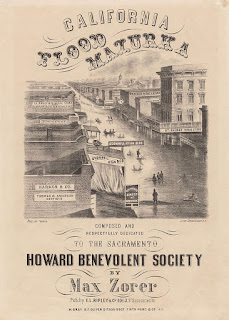 forty-eight hours during one of the January storms. Los Angeles reported a rainfall of more than sixty-six inches, four times more than the annual rainfall.
I’m sure most Californians thought the drought had ended. Rivers would be running. Lakes filled up. Cattle and horses would have plenty of feed. Gardens would produce. Sad to say within a very short time an even more severe drought began. A drought that would ruin many a rancher.

GIVEAWAY
Have you ever experienced a flood? Or, perhaps where you live they have struggled with drought. I would love to hear about your experience, or thoughts. Please leave a comment below about one of the above questions to be entered to win a copy of The Cowboy’s Bride.

Ride onto the open range alongside cowboys and cowgirls who embrace the adventures of living in the Old West from Kansas to New Mexico, Colorado to Texas. Whether rounding up cattle or mustangs, training horses, fending off outlaws, weathering storms, competing in rodeos, or surviving drought these cowboys work hard each day. But when hardheaded men have their weaknesses exposed by well-meaning women will they stampede away or will a lasting love develop? Find out in this exciting collection of nine historical romances.

Nancy J Farrier is an award winning author who lives in Southern California in the Mojave Desert. She loves the Southwest with its interesting historical past. Nancy and her husband have five children and two grandsons. When Nancy isn’t writing, she loves to read, do needlecraft, play with her cats, and spend time with her family. Nancy is represented by Karen Ball of The Steve Laube Literary Agency. You can read more about Nancy and her books on her website: nancyjfarrier.com.
Posted by Debbie Lynne Costello at 1:30 AM