Since my novella, Romantic Refinements, is set near historical Austin, Texas, I spent days researching the time period and general area for events that I could use in my story. The State Fair would be perfect for my story because I wanted my main characters to wander on the fairgrounds during the afternoon, and then make some personal discoveries during the evening’s dance. 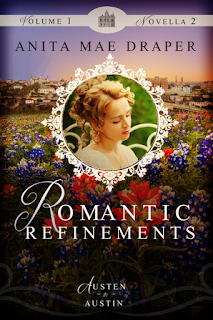 The problem was that my story was set in 1882, but all references to the Texas State Fair placed its origin in 1886. Here’s what the Texas State Historical Associations’s Handbook of Texas has to say about its origin:


“STATE FAIR OF TEXAS. The Dallas State Fair and Exposition, to which the present State Fair of Texas traces its origin, was chartered as a private corporation on January 30, 1886, by a group of Dallas businessmen…”

Well, that wouldn’t work, so I went back to researching. About this time, the other Austen in Austin novella authors were discussing where we would locate the one feature common in all of our novellas – the   Jeanette C. Austen Academy for Young Ladies. From that, the Hyde Park area was bantered around so I dug around there to see if I could use it.

Imagine my delight when I discovered a Wikipedia article stating, “Located approximately twenty blocks from Austin's original town site, the area now known as Hyde Park was largely rural in character for much of the 19th century. The State Fair of Texas was held in the eastern sections of Hyde Park from 1875 until it was moved to Dallas in 1884.”

And then while checking out the Austin History Center, I found this old glass negative showing the State fairgrounds with its racetrack, grandstands and spectators located at Hyde Park.


There were more mentions of the Capital State Fair in Austin, such as this message from Michael C. Miller, Manager, Austin History Center, Austin Public Library in response to a question about the State and County Fairs and Expositions. Mr. Miller states, “The Capital State Fair was held in Austin 1875-1884 on the Fairgrounds in the Hyde Park neighborhood of Austin. For a good overview of the fair, see chapter 1 of "Austin's Hyde Park" by Sarah and Thad Sitton (Pecan Press, 1991). Information about this fair can also be found in Frank Brown's "Annals of Travis County.”…” and then he added a list of available resources, most of which I haven’t been able to locate online.


However, his mention of “2 exhibit catalogs (1878 and 1884)” sent me searching the ranks of Google Books, which is where I found an image of the cover of the 1884 Capital State Fair Programme & Premium List, and the accompanying text which states, “The Capital State Fair of Texas, predecessor of the Dallas State Fair, was held in Austin from 1875 through 1884.”

I found the above image in the book, Texas Furniture, Volume Two: The Cabinetmakers and Their Work, 1840–1880 By Lonn Taylor and David B. Warren, and although I don’t normally post images from books, this is the only image I could find of either of the aforementioned 1878 and 1884 catalogs (also called exhibition list).

The reason for furniture being included in a state fair listing was because it was one of many options available for exhibitors. I’m not sure if contemporary state fairs have commercial furniture exhibits, but usually, there is a chance to enter your own hand-crafted treasures, such as woodworking, needlecrafts, and other creations, in the general, youth, or schoolwork categories of  local country fairs.


While still in Google Books, I saw a blurb using the phrase, Capitol State Fair. So, I changed my search box to reflect Capitol instead of Capital, and I found the Premium List for the Thirty-First Annual Illinois State Fair to be held at Chicago, September 24-29, 1883, with this image inside:


There it was, near the bottom, listed in second-last place:

My research as far as there being a State Fair in Austin in 1882 was complete – there certainly had been one even it isn’t recognized as such in the Texas State Historical Associations’s Handbook of Texas.


When you read my Austen in Austin novella, Romantic Refinements, I hope you enjoy the chapter(s) on the State Fair, because once I’d established that there had been one, my next task had been to research exhibits and midway entertainment. Research fun never ends.

Giveaway – a digital copy of Austen in Austin Volume 1 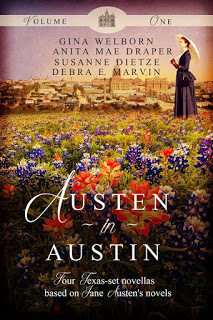 Anita Mae Draper's stories are written under the western skies where she lives on the prairie of southeast Saskatchewan with her hubby of 30 plus years and the youngest of their four kids. When she's not writing, Anita enjoys photography, research, and travel, and is especially happy when she can combine the three in one trip. Anita's current release is Romantic Refinements, a novella in Austen in Austin Volume 1, WhiteFire Publishing, January 2016.  Anita is represented by Mary Keeley of Books & Such Literary Management. You can find Anita Mae at  www.anitamaedraper.com

Posted by Debbie Lynne Costello at 2:00 AM