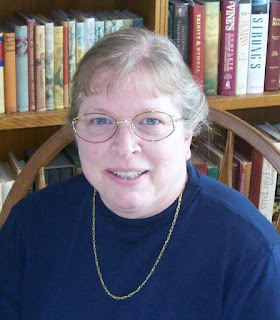 Jan Drexler, a recent graduate from Homeschool Mom-hood, devotes her time to the voices in her head who have been clamoring for attention during the last few decades. Instead of declining Latin nouns and reviewing rhetorical devices, her days are now spent at the computer where she gives her characters free rein.
She lives in the Black Hills of South Dakota with her husband of thirty years, their four adult children, an extremely furry Husky, and Maggie, the cat who thinks she's a dog. If she isn't sitting at her computer living the lives of her characters, she's probably hiking in the Hills or the Badlands, enjoying the spectacular scenery.

Jan is graciously giving away 2 copies of her new release, The Prodigal Son Returns. Tell us an interesting history tidbit or just leave a comment for Jan to be entered.

Where are you right now (LVR, DR, Bathroom) and what are you wearing? You have to tell the truth.
-    I’m so glad I waited until mid-morning to answer these interview questions! I’m in the dining room, wearing my favorite summer dress (because yesterday was warm), and a sweater (because this morning is still a little cool!). Oh, and slippers. Camo and fuzzy.

What is the funniest, strangest, or most interesting thing you have learned when doing research?-    I learned so much doing the research for this book! I think one of the most interesting things I learned was that the Amish didn’t always have their own schools.  In Indiana, schools were consolidated after World War 2, which took children farther away from home for a public education.  That was the last straw in an ongoing battle between the Amish and the public school system, and the Amish began to establish local, private schools for their children.
-    So in my book, which takes place during the Great Depression of the 1930’s, the children attend a local public one-room school.

If you were told you were being sent back to live in the 19th Century, and you could bring one thing from today, what would that be?-    The story I’m working on now takes place in the 1840’s, and nine years before the story begins, three of the children in the family die in a diphtheria outbreak. The one thing I’d take from today is the medical knowledge to prevent and treat diseases like that.

What is something that very few people know about you?
-    I’ve always had a secret desire to be a cowboy . I love living in the west, where I often see cowboys…in line at the grocery store, walking down the street, driving through town with their horse trailers…

What is your favorite material item that you own (examples: ipod, Gone with the Wind book, grandmother’s rocking chair)-    I have to choose one?
-    One of the things I cherish is the quilt my maternal grandmother made for me when I was born. Every stitch speaks of her love.

If you could live in any time period other than the one we live in, when and where would that be and why?
-    I would love to have lived in the Black Hills of South Dakota during the 1880’s. Like I said before, I always wanted to be a cowboy! And I love this area. We’ve lived in the Black Hills for two years, and I see these ranches  - still in existence – that were established in the 1870’s and 80’s, and I wonder what it would have been like to be the first generation of ranchers.

Do you think birth order affects the way you write?
-    I think so. I’m the second born, and the youngest, and my writing tends to be quiet and nostalgic rather than assertive.

If you were writing a book about your life what would the title be?-    Rescued from the Pit
-    The most important thing that ever happened to me was when God had mercy on me and turned my heart of stone into a heart of flesh.

What one novel did you read that made you want to be a part of the story?
-    Tolkein’s Lord of the Rings. I try to read it every year in September – following Bilbo down along the sloping path and over the low place in the hedge at the bottom of the garden. 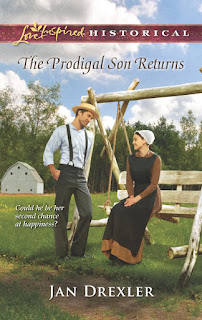 From her first glimpse of his big-city suit, Ellie Miller knows Bram Lapp is trouble. The handsome Englischer says he wants to reclaim the life he left long ago. Even if his smile disarms her, all of Ellie's energy must go to her children and their struggling farm…and to atoning for her mistakes.
A criminal's trail has brought FBI informant Bram to Ellie's warm and welcoming Indiana community. Now he's posing as the kind of man he once hoped to be. Someone steadfast and upright. Someone who might be worthy of Ellie. Because no matter how much she claims she doesn't want a second chance at love, he knows he's found the home they were meant to share.


DOUBLE YOUR CHANCES OF WINNING by following my blog with Powered by FEEDBURNER on the right, and don't miss any giveaways (the button with the flame). If you already follow my blog go ahead and follow by FEEDBURNER so you can be entered twice. If you're not getting an email telling you I have a new giveaway you're not following through Feedburner. Just mention that you follow through Feedburner when you leave a comment with each giveaway and you'll be entered twice.
Be sure to leave your email address. Please check your junk mail on and the day after the drawing. I've had to redraw because of no responses. Subject box will have: winner of (book title). I'll email the winner and they'll have seven days to respond. If I don't hear back I'll draw another name. USA shipping only. Thanks so much and please stop back again! Drawing will be held Monday, May 20th at 8:00 A.M. EST. Offer void where prohibited. Odds of winning vary due to the number of entrants.
Posted by Debbie Lynne Costello at 3:00 AM