Tina Pinson resides in Mesa, Arizona with her husband of thirty plus years, Danny. They are blessed to have three sons, and six grandchildren with another on the way.  Tina started her writing in elementary school. Her love of writing has caused her to seek creative outlets be it writing poetry, songs, or stories. Her WWII story Trail of the Sandpiper won third place in the Genesis in 2003.  In the Manor of the Ghost and Touched By Mercy and When Shadows Fall Book 1 in the Shadows Series are available through Desert Breeze Publishers. To Catch a Shadow the next installment of the Shadow Series about the civil war and the Oregon Trail, will be available, June 2013. To Carry her Cross will be available January 2013 and Then There was Grace a Sept 9/11 type story will be available Sept. 2013 and Christmas in Shades of Gray an offbeat Dickens type tale releases December 2013.

Am I thankful? I'm sure I say this every year, but where did the time go. Shortly 2012 will leave the stage and be filed in the annuals of history. It's been an interesting year. But before this year fades, I still have a month and a half to go.
Thanksgiving is coming and I have to ask myself… Am I thankful? Are things better off this year than the last? The world has been on edge financially. There were uprisings in the Middle East and some here at home. The war is still going on in Afghanistan. We are still at odds with Iran. Our ambassador and three others were killed in Libya. When you read this we will have gone through another presidential election. Let's hope my candidate wins. There have been fires and floods, and drought and famine. The gas prices are horrendous. People are still looking for jobs and more seem to fall into poverty everyday.


Wouldn't it be nice to go back to a simpler time? A quiet time. A… Actually, even with all the unrest, we do have it pretty easy in comparison to past generations. Especially to the time my characters live in Shadowed Dreams.
Rebekah is twenty-three and has already lost her parents, a sibling, a husband and a daughter. She has lived in near poverty trying to keep her self and son in a home and food. Now she's on the Oregon Trail with her new husband, Matthew. And getting there wasn't quite that easy.
Today we have the convenience to get in our car, and drive what will take Matthew and Rebekah 6 months. Remember it already took 2-3 weeks just to get to Independence to join the train.
Rebekah and Matthew will have stored food to get them through several months. Yes they could stop at stores in some of the towns, but they didn't have ice chests or room to keep too much more than the necessities in their already cramped wagons. And thank about the money they had to save to take the trip.
We sit in our air-conditioned cars, and pull out credit cards or debit cards to get the gas and snacks we want as we travel.
Rebekah and Matthew are traveling in the heat, sleeping with bugs and all kinds of critters. Making, at the most, 18 miles or so a day. They cooked over an open flame. Hunted for their meat. Made due with a bit of brush or a hole in the ground for private matters. I know people who get irritated if the color or texture of the toilet paper isn't up to par.
Roughing it for some Americans is done in expensive campers -- some three times or more the size of the wagons used on the Oregon Trail -- outfitted with every modern convenience, with full bathrooms and queen sized beds.
We say we need to get a way for the weekend and find some peace.
Rebekah and Matthew were hoping to leave some of the horrors from the Civil War behind. But they didn't get away from it all.
We don't live in fear moment-by-moment wondering when some bomb is going to rip our world apart. For me, I just turn off the news and shut the front door and I have quite a bit of peace and quiet. And that's something to be thankful for. I hope you find much to be thankful this year too.
Leave a comment and tell me what you're thankful for, for a chance to win an ebook Copy of Shadowed Dreams. 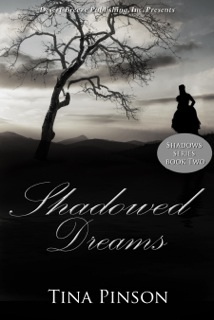 Matthew has braved the war and near death with one thought in mind… Rebekah. He won her hand in marriage, and now he has a few short months to make her see how much he loves her. How much he needs her. Given the wall she's put up between them, he prays he'll have enough time.

After fleeing the war, Rebekah is determined to go west to Oregon, only to be turned down when she tries to join the train. Matthew's proposal of marriage, in name only to help her west, becomes the miracle she needs. Loving him as she does, she dreads the idea of letting him go once they reach Oregon, but how can she ask him to stay with her, to love her? How could he love her once he's found out her secret? She must guard her heart and his.

Purchase my books at:


DOUBLE YOUR CHANCES OF WINNING by following my blog with Powered by FEEDBURNER on the right, and don't miss any giveaways (the button with the flame). If you already follow my blog go ahead and follow by FEEDBURNER so you can be entered twice. If you're not getting an email telling you I have a new giveaway you're not following through Feedburner. Just mention that you follow through Feedburner when you leave a comment with each giveaway and you'll be entered twice.
Be sure to leave your email address. Please check your junk mail on and the day after the drawing. I've had to redraw because of no responses. Subject box will have: winner of (book title). I'll email the winner and they'll have seven days to respond. If I don't hear back I'll draw another name. USA shipping only. Thanks so much and please stop back again! Drawing will be held Monday,November 12th, 8:00 A.M. EST. Offer void where prohibited. Odds of winning vary due to the number of entrants


Posted by Debbie Lynne Costello at 9:51 AM