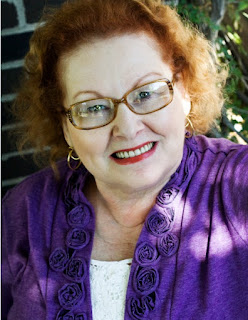 Award-winning author, Lena Nelson Dooley, has more than 690,000 books in print. She is a member of American Christian Fiction Writers http://www.acfw.com/ and the local chapter, DFW Ready Writers. She’s a member of Gateway Church in Southlake, Texas.
It's good to have you back on my blog again, Lena. Lena is giving away a copy of Mary's Blessings to one blessed winner. Leave a comment or answer one of the questions she asks to be entered to win. And as always, don't forget to let me know if you're a follower so you get a second entry and leave your email addy so I can contact you if you win. Good luck!
Of Great Importance in My Writing Life
One of the most important things in this author’s life is my readers. I love all of you. Hearing from you is a high point of my day. Even if you didn’t like some aspect of my book, I like to hear from you. I want to connect with you in every way I can. And you can find me on a lot of online venues—Facebook, Twitter, Shoutlife, Pinterest, Goodreads, my blog, and my web site.
I’m really interested in book clubs and reading groups. I enjoy connecting with you through the electronic technology of telephone calls or Skype video. I’m happy to answer questions about the stories, why I wrote them, and any other question you may have.
My newest series McKenna’s Daughters. The heroines were born on one of the last wagon trains on the Oregon Trail. Their mother died giving birth, and because of the circumstances, they were separated. It’s not until they are about eighteen years old that they learn they have two sisters. And the desire to find their sisters is strong in each of them.
Books one and two are stand alone novels, which can be read in any order. But you’ll probably want to read book one and two before book three releases in January 2012.
Maggie’s Journey released in October 2011. I’ve heard from a lot of readers. Many of they have been adoptees. They were interested in that aspect of the book, which was set in1885 in Washington Territory. Maggie journey took her to Little Rock, Arkansas, by train.
Maggie had grown up the spoiled daughter in a wealthy family. She had no idea she was adopted. Most people were intrigued by the way she found out. One Christian reviewer put Maggie’s Journey on her Top Books of 2011 list.
Mary’s Blessing is releasing May 15, 2012. Mary has always known she was adopted, but because her mother died when she was eleven years old, no one told her the circumstances. That information really affected her when she found out. Her mother had called her God’s Blessing, but she didn’t feel like anyone’s blessing. Her spiritual and romantic journey intertwine in an interesting and surprising way.
If you didn’t get a chance to read book one, we’ll give away a copy to one lucky (or I should say blessed) reader.
Have you ever let an author know when something in a book bothered you?
Have you ever contacted an author and let that person know how much their book meant to you?
In either case, what happened?
Featured Book: 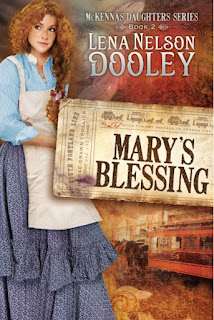 Author: Lena Nelson Dooley
Title: Mary’s Blessing
Series: McKenna’s Daughters Series, Book 2
ISBN: 978-1-61638-617-7
Publisher: Realms
“Lena Nelson Dooley paints a vivid picture of all the tragedies and triumphs of nineteenth-century life. The charming characters, godly themes, and tender love story will leave you wanting more and eagerly awaiting her next book.” —Margaret Brownley, New York Times best-selling author of Brides of Last Chance Ranch
When her mother dies, Mary Lenora must grow up quickly to take care of her brothers and sisters. Can love help her to shoulder the burden?
Mary Lenora Caine knows she is adopted. As she was growing up, her mother called her “God’s blessing.” But now that she’s gone, Mary no longer feels like any kind of blessing. Her father, in his grief, has cut himself off from the family, leaving the running of the home entirely in Mary’s hands.
As she nears her eighteenth birthday, Mary can’t see anything in her future but drudgery. Then her childhood friend Daniel begins to court her, promising her a life of riches and ease. But her fairy-tale dreams turn to dust when her family becomes too much for Daniel, and he abandons her in her time of deepest need.
Will Daniel come to grips with God’s plan for him? And if he does return, can Mary trust that this time he will really follow through?
More about Lena
Lena loves James, her children, grandchildren, and great grandson. She loves chocolate, cherries, chocolate-covered cherries, and spending time with friends. Travel is always on her horizon. Cruising, Galveston, the Ozark Mountains of Arkansas, Mexico. One day it will be Hawaii and Australia, but probably not the same year. Helping other authors become published really floats her boat, with eighteen signing their first book contract after her mentoring. Three of her books have been awarded the Carol Award silver pins from American Christian Fiction Writers, and she has received the ACFW Mentor of the Year award at their national conference. The high point of her day is receiving feedback from her readers, especially people whose lives have been changed by her books.
Her 2010 release was Love Finds You in Golden, New Mexico, from Summerside Press which recently won the Will Rogers Medallion Award for excellence in publishing Western literature for fiction. Lena is currently under two 3-book contracts with Charisma House/Realms. The first book released in October 2011. Maggie’s Journey appeared on a reviewers Top Books of 2011 list. The second is Mary’s Blessing, which will release in May 2012.
In addition to her writing, Lena is a frequent speaker at women’s groups, writers groups, and at both regional and national conferences. She has spoken in six states and internationally. She is also one of the co-hosts of the Gate Beautiful blog radio show.
Lena has an active web presence on Shoutlife, Facebook, Twitter, Goodreads, Linkedin and with her internationally connected blog where she interviews other authors and promotes their books.
Website: www.lenanelsondooley.com
Blog: Http://lenanelsondooley.blogspot.com
Pinterest: http://pinterest.com/lenandooley/
Facebook: www.facebook.com/lena.nelson.dooley
Official Fan Page: www.facebook.com/pages/Lena-Nelson-Dooley/42960748768?ref=ts
Goodreads: http://www.goodreads.com/author/show/333031.Lena_Nelson_Dooley

Be sure to leave your email address. Please check your junk mail on and the day after the drawing. I've had to redraw because of no responses. Subject box will have: winner of (book title). I'll email the winner and they'll have seven days to respond. If I don't hear back I'll draw another name. USA shipping only. Thanks so much and please stop back again! Drawing will be held Monday, May 21st. Offer void where prohibited. Odds of winning vary due to the number of entrants.
Posted by Debbie Lynne Costello at 6:00 AM