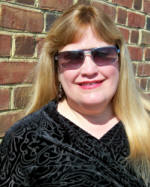 Laurie Alice Eakes used to lie in bed as a child telling herself stories so she didn't wake anyone else up.  Sometimes she shared her stories with others; thus, when she decided to be a writer, she surprised no one. In the past three years, she has sold six books to Baker/Revell, five of which are set during the Regency time period, four books to Barbour Publishing, as well as two novellas to Barbour Publishing and one to Baker/Revell. Seven of her books have been picked up by Thorndike Press for large print publication, and Lady in the Mist, her first book with Revell, was chosen for hardcover publication with Crossings Bookclub. She also teaches on-line writing courses and enjoys a speaking ministry that has taken her from the Gulf Coast to the East Coast. Laurie Alice lives in Texas with her husband, two dogs and two cats, and is learning how to make tamales.
I'm very happy to have my dear friend, Laurie Alice back with me this week. Laurie Alice is sharing from her heart today. If you ever wondered why her novels are so moving, your question is about to be answer. If you haven't read any of her books, you need to put her on your HAVE TO READ list! One book and she'll have you hooked. Laurie Alice is generously giving away two books this week (your choice of print or e-book), a copy of A Heart's Safe Passage and a copy of Lady in the Mist. Answer the question, How has a novel you've read helped you in your spiritual walk? Or leave a comment to be entered. Let me know if you are a follower for a second entry and don't forget to leave your email address so I know how to contact you should you win. Good Luck!
The Writing of a Heart
Recently, someone said that a writer should be able to produce a romance novel in one to two months. Don’t we wish—or not. Writing the heart of our characters takes time and thought, and exactly the right words.
The weird thing about being a writer is that it is a solitary profession in which we write about people and the human condition; i.e., emotions like love and distaste; antagonism and hope; rage and yearning. Although one would hope that no writer has faced the difficult situations into which she has set her characters, a few have, and, ironically, that makes writing the scene all that much worse.
Writing from personal experience is risky. I put a lot of personal stuff into a novel once and had an editor tell me I didn’t know what I was talking about. Sigh. I knew that I knew a whole lot more than she did in this particular situation, but was helpless to tell her so.
So when I started writing Heart’s Safe Passage, I didn’t want to write a background for Phoebe I knew the story demanded me to write. It meant digging deep into my soul, my spirit, the very heart of my being to dredge up memories.
No, I was never locked in a room to keep me from going out with friends. Not exactly. I never had things happen to me that happened to Phoebe, which I won’t say here so as not to create spoilers. Yet I understand from the places inside me that matter, what emotions Phoebe needed to feel.
When I was young enough to think it didn’t matter, and old enough to know better, I got involved with someone who dragged me away from my faith and from myself. By the time I managed to extricate myself from that period in my life, thanks to the last words to me of a dying friend, the prayers of my parents, and, yes, Christian fiction, I knew how to walk the appearance of a godly woman, say the right things, do the right things, while buried beneath my veneer  of spiritual renewal, my spirit ached like a tooth that looks just fine, but has a cavity deep inside at the root.
Ironically, I had long since forgiven him and held no enmity toward the person who hurt me. I had long since moved on, married, launched my writing career. And yet, as I wrote Phoebe’s story in Heart’s Safe Passage, I dug deep enough into my heart to write down what was going on in Phoebe’s, and found my own buried secrets and spiritual issues needing healing, God’s love, and, above all, self-forgiveness.
Yes, this is the theme of my midwives books—self forgiveness. As I began writing of the hearts of women, strong, independent, courageous women, in this series, I realized that accepting God’s forgiveness, though not always easy, is far easier than accepting the forgiveness of ourselves. We bully ourselves. We beat ourselves up. We call ourselves fat, stupid, ugly, and often act like self-deprecation is amusing. Yet Mark 11:25 says, “And when you stand praying, if you hold anything against anyone, forgive them, so that your Father in heaven may forgive you your sins.”
I had to come to realize that “anyone” includes myself.
This is my story—or part of it—that I made a lot of bad choices. God has forgiven me; therefore, I am required to do nothing less.
This is Phoebe’s story—she made choices mainly because of social pressure of her day and standing in the community. God forgave her, but the events that follow because of how she has not forgiven herself are a thread that runs through the swashbuckling romance of the story until she finds her Heart’s Safe Passage home. 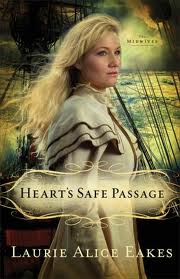 One woman takes the treacherous journey toward redemption . . . and love.All Phoebe Lee wants out of life is to practice midwifery in Loudon County, Virginia. But when she refuses to accompany her pregnant sister-in-law to help save her husband from an English prison during the War of 1812, Phoebe finds herself pressed aboard a British privateer.

Captain Rafe Docherty promises to get Phoebe's brother-in-law out of prison in exchange for information Rafe needs to exact revenge on the man who destroyed his family. As he realizes his attraction to Phoebe, she determines to get ashore before her patient goes into labor--and before her own heart is in danger. But an enemy in their midst threatens to end their plans--and their very lives. 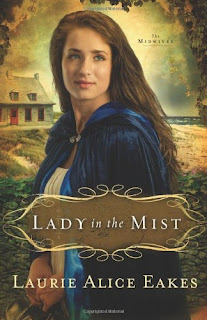 By virtue of her profession as a midwife, Tabitha Eckles is the keeper of many secrets. Dominick Cherrett is a man with his own secret to keep: namely, why he, a British aristocrat, is on American soil working as an indentured servant.

In a time when relations between America and England rest on the edge of a knife, Tabitha and Dominick cross paths, leading them on a journey of intrigue, threats, public disgrace, and . . . love. But can Tabitha trust Dominick? Finding true love seems impossible in a world set against them.
DOUBLE YOUR CHANCES OF WINNING by following my blog with Powered by FEEDBURNER on the right, and don't miss any giveaways (the button with the flame). If you already follow my blog go ahead and follow by FEEDBURNER so you can be entered twice. If you're not getting an email telling you I have a new giveaway you're not following through Feedburner. Just mention that you follow through Feedburner when you leave a comment with each giveaway and you'll be entered twice.
Be sure to leave your email address. Please check your junk mail on and the day after the drawing. I've had to redraw because of no responses. Subject box will have: winner of (book title). I'll email the winner and they'll have seven days to respond. If I don't hear back I'll draw another name. USA shipping only. Thanks so much and please stop back again! Drawing will be held Monday, May 28thh. Offer void where prohibited. Odds of winning vary due to the number of entrants.
Posted by Debbie Lynne Costello at 7:39 AM