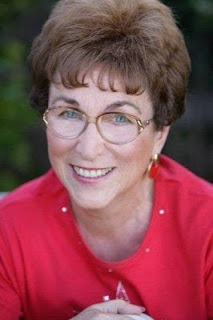 About Margaret:
Thrills, mystery, suspense, romance: Margaret penned it all. Nothing wrong with this—except Margaret happened to be writing for the church newsletter. After making the church picnic read like a Grisham novel, her former pastor took her aside and said, "Maybe God's calling you to write fiction."
So that’s what Margaret did. She’s now a New York Times bestselling author and a Romance Writers of America RITA finalist with more than 25 novels to her credit
The first book in her Brides of Last Chance Ranch series “Dawn Comes Early” will be published March 2012.  The book will be followed by Waiting for Morning.
Margaret’s also excited to announce that her non-fiction book “Grieving God’s Way: The Path to Hope and Healing” will be published in July—not bad for someone who flunked 8th grade English.  Just don’t ask her to diagram a sentence.
I'm so happy to have Margaret back with me. She has graciously offered to give away a copy of her new release Dawn Comes Early. Be sure to leave a comment or answer the question, What is the strangest, most interesting or funniest thing or law you have learned about that was done in the 19th century? If you follow by feedburner be sure to mention it and don't forget to leave your email so I can contact you if you win.


More Love and Laughter from New York Times Bestselling Author
Margaret Brownley
“I’ve matched up twenty-three couples over the years and in all that time I only made one error. Although I still think the marriage would have worked had she not shot her husband.—Aunt Bessie in Dawn Comes Early
Old Time Meetings Stir Muse
I love reading nineteenth century newspapers. Advertisements and articles are filled with all sorts of valuable information but a society’s social and political concerns can best be found in old meeting notices.  A meeting notice for “The Society for the Protection and Preservation of Male Independence” found in an old Kansas newspaper gave me the idea for my Rocky Creek series.
Apparently men weren’t the only ones concerned with maintaining independence during the nineteenth century.  In 1861 fifty ladies of the first Church of Milford in New York formed a society of old maids. It cost five dollars to join the group and members had to vow never to marry. The interest earned from the money paid for the annual dinner, with the principal going to the woman who remained unmarried the longest.
According to an article in the New York Times thirty years later in 1891 all but fifteen of the original fifty had married.  By then the prize money had risen to a thousand dollars.  I’ve not been able to find the winner’s name—and being a romantic I sincerely hope there wasn’t one— but the best part of being a writer is where real life fails, inspiration takes over, and so the idea for my new series The Brides of Last Chance Ranch was born.
Sixty-five year old Miss Walker is looking for an heiress for her cattle ranch in Arizona Territory.  To that end she advertises for a hard-working, professional woman of good character and pleasant disposition.  Most important the woman must be single and prepared to remain so now and forever more.
In Dawn Comes Early we meet Kate Tenney—a disgraced dime novelist whose latest book was banned in Boston.  I don’t know what the Milford ladies had against matrimony, but Kate has every reason to remain single and she intends to prove that she’s up for Miss Walker’s cow punching job—if it kills her.  If only she can stay away from a certain handsome blacksmith and his two matchmaking aunts.
So that in a nutshell is how I came up with my story line. Of course not all old meeting notices stir the creative juices and some, like the “Society for the Prevention of People Being Buried Alive,” give me the willies, but then nothing is perfect, is it?
Visit Margaret at www.margaretbrownley.com
Also on facebook and Twitter
Dawn Comes Early rides of Last Chance Ranch

Heiress Wanted
Looking for hard-working, professional woman
of good character and pleasant disposition
willing to learn the ranching business in Arizona Territory.
Must be single and prepared to remain so now and forever more.
Her latest dime novel banned, twenty-nine-year old KATE TENNEY answers an advertisement for heiress to an Arizona cattle ranch. It seems like the perfect solution for a disgraced novelist with no intention of getting married—ever.
Trouble begins the moment she steps foot in Arizona Territory. The west is nothing like she wrote about in her books. Not only does she have to deal with a hard-nosed ranch owner, and nefarious outlaw, but a traitorous heart.  Kate does not trust men and has no intention of falling for LUKE ADAM’S charm.  She’s determined to learn the ranching business and prove to the doubting ranch owner that she’s up to the task—if it kills her.  If only she could stay away from a certain handsome blacksmith and his two matchmaking aunts.
DOUBLE YOUR CHANCES OF WINNING by following my blog with Powered by FEEDBURNER on the right, and don't miss any giveaways (the button with the flame). If you already follow my blog go ahead and follow by FEEDBURNER so you can be entered twice. If you're not getting an email telling you I have a new giveaway you're not following through Feedburner. Just mention that you follow through Feedburner when you leave a comment with each giveaway and you'll be entered twice.

Be sure to leave your email address. Please check your junk mail on and the day after the drawing. I've had to redraw because of no responses. Subject box will have: winner of (book title). I'll email the winner and they'll have seven days to respond. If I don't hear back I'll draw another name. USA shipping only. Thanks so much and please stop back again! Drawing will be held Monday, March 26th. Offer void where prohibited. Odds of winning vary due to the number of entrants.
Posted by Debbie Lynne Costello at 11:49 PM