Lynn A. Coleman is an award winning and best-selling author of Key West and other books. She began her writing and speaking career with how to utilize the Internet. Since October 1998, when her first fiction novel sold she's sold 30 books and novellas.


Where are you right now (LVR, DR, Bathroom) and what are you wearing? You have to tell the truth. (and you are wondering what does this have to do with carriages?. Nothing. I ask this question to every person I interview.J)
I’m in my office, it’s the middle of the night and I can’t sleep so I’m in my nightgown, sorry folks but it is true.
What got you interested in writing about 19th century carriages?
First reason is for my own personal need to organize my research as well as the realization that my mind went to only three types of carriages. Second reason is I believe writing on this topic would be helpful to other historical authors.
You have got massive amounts of information and so much comes straight from old books. How did you find these treasure troves?
Using 19th century sources was important to me because it reflects the information and attitudes of the people from that time period. So, often we look at history from our own perspective, which isn’t bad but when you are trying to write from your historical character’s thoughts and understanding of their environment the more resources from their time period the better.
How long did it take you to put this book together?
In total 15 months, gathering the information carried on throughout the process but the last eight months I’ve been working on the html code and gathering more research to fill out some of the information on the individual wagons.
Now for a little trivia.
What is the most unusual vehicle you came across and what was it used for.
The most unusual was the three wheeled carriage or chariot (below) and it was primarily used to transport people from place to place. 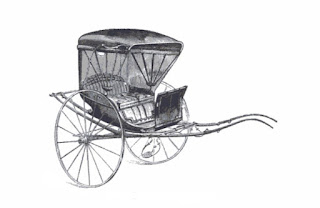 What did the most expensive carriage made in the US cost?
By the end of the century some of the fancy carriages were nearing $2000.
What did the cheapest?
A Buggy from the Sears & Roebbock catalogue for in 1898 for $55.
What would you say the “hot rod” of the 19th Century was?

Several carriages in the Phaeton family could apply, especially the Lady Phaeton or the one pictured below the Italian Phaeton. 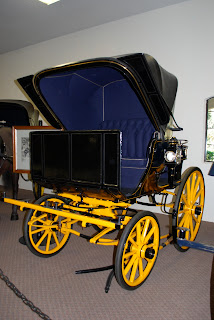 What were some of the nicest features you saw in a carriage and what carriage was it in?
Some of the European royalty carriages were amazing, however, they are not covered in this book. American Carriages tended to be more practical and efficient. Don’t get me wrong the wealthy in America still had very nicely crafted carriages with plush leather seating and made from some of the finest wood available. These were often displayed during the Easter parade in New York City as well as other cities. But overall the American market demanded more than one use for any carriage or wagon.
There was protocol to getting in and out of a carriage and in the seating positions (forward vs backward) can you tell us about that?
Check out the section in the book about social etiquette. There you’ll find some of the formal ways to help a lady in and out of a carriage. Most carriages that carried passengers had a step or two for easy access. However if I woman was driving a large working wagon it wasn’t an easy task to climb up the wheel hub and hoist herself into the driver’s seat, those long skirts and petticoats could get in the way.
Approximately how many different carriages were there?
The reality is there were thousands each craftsman would build the carriage to the needs of their community and their customers. There were several basic forms with many adaptations.
What was the most popular carriage?
The American Buggy seems to have been the most popular. It could be used for hauling but it also could carry the family to and fro as well as out for a Sunday stroll. 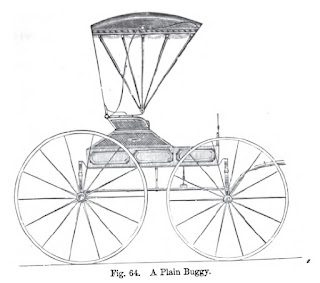 And lastly, after researching all these carriages, if you had lived in the 19th century what would your dream carriage have been?
The Brett because it was the RV of the 19th century or at least it could be used that way. It had a long body so the passengers could spread out and lay down inside it for the night. One man made this into his portable office for tracking the progress on the railroad lines. He had a small desk as well as his sleeping area. Of course, he didn’t bring his family with him on these trips so he had a bit more space. 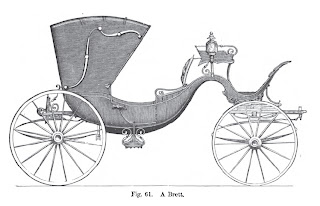 Thanks Debbie Lynne for the chance to share a bit about my book 19th Century Carriages & Wagons, A Writer’s Resource and thanks for all the help you gave me with the copy edits.
It was so interesting reading this. And it was fun getting to know you better.
Posted by Debbie Lynne Costello at 12:49 PM