Roseanna M. White, author of A Stray Drop of Blood, makes her home in the mountains of Western Maryland with her husband, two small children, and the colony of dust bunnies living under her couch. After graduating from St. John’s College in Annapolis, MD, she and her husband founded the Christian Review of Books, where she is the editor. She is a member of ACFW, HisWriters, Biblical Fiction Writers, and HEWN Marketing.
Roseanna is graciously giving away a copy of A Stray Drop of Blood or Jewel of Persia. It is the winner's choice and it can be either digital or paper back. Leave a comment to be entered!
Where are you right now (LVR, DR, Bathroom) and what are you wearing? You have to tell the truth.
I'm in my living room, curled up cross-legged in my chair, laptop on the end table in front of me, wearing my jammies.
What thing surprised you the most when you were researching your book?
There was a lot I didn't know about the Persian culture, so that was surprise upon surprise. But aside from the utter wealth of the Persian kings, the aspect of it that surprised me the most was how modern they were in many of their ideals. Persia, though a monotheistic society, practiced religious tolerance; more interesting still was their treatment of women. Though you might not expect it of polygamists, Persia was very fair with women, often paying them twice the wage a man would make for the same job so they could support their children, and giving a year's maternity leave. How cool is that??
Many writers will say they see stories all around them. Is there someplace you found this story?
Um . . . the shower? LOL. That's where the idea struck, as I was trying to figure out a new take on my all-time favorite Bible story—Esther.
Do you have a favorite scene in this book and what would it be?
My favorite scenes are from what I've come to term “The Day of Darkness”--a documented day in Persian history when the sun was blotted out and it became black as night. These folks knew their astronomy, and it wasn't an eclipse, or heavy clouds. In trying to figure out how to include this strange phenomena in my story, I was led into a spiritual side to the tale that I hadn't realized would be there, and that really deepened my characters as I wrote it.
What is something that very few people know about you?
I hate traveling. I love being new places, but the process of getting there usually gives me migraines. I really, really wish it didn't—I have a cross-country flight coming up in August. ;-)
If you could visit any place in the world where would you go and why?
This answer changes weekly. =) Lately, it's Sicily. My family's former foreign exchange student is living there now, and he keeps torturing us with awesome pictures of the Sicilian countryside, trying to convince us to come for a visit. I'd really love to oblige him! I've always loved Italy (my hubby's half Italian, by the way), and I would so adore the chance to experience the centuries of history there, and see the amazing landscapes.
What was the greatest thing you learned in school?
The power of a good story. =) I had a slew of awesome teachers in my early education who all encouraged my writing and pointed me in the direction of great literature. And so it was a natural step for me to go to St. John's College, known as the Great Books School. There, I learned the value of asking the right questions and how to read, not just to see what an author thinks, but to figure out what I think about it.
What is most unusual, funny or interesting thing you have learned when doing research?
That a bad winter nearly destroyed the peace with England following the Revolution. The delegates couldn't get to the capital to ratify the Treaty of Paris, and the founding fathers were prepared to get sneaky and underhanded to guarantee King George didn't renege. Thankfully, it all worked out, LOL.
What is your favorite material item that you own (examples: ipod, Gone with the Wind book, grandmother’s rocking chair)
Hmm, this is a tough one. I just got a box of really old books from my grandmother that I'm totally in love with, and I have some family jewelry that's really special to me. But I think one of my favorites has to be the old oil lamp I got from my great-grandfather. He collected them, restored them, converted some to electric. This one, though, is Civil War era and totally gorgeous. It has a place of honor on the buffet in front of my living room windows. =) 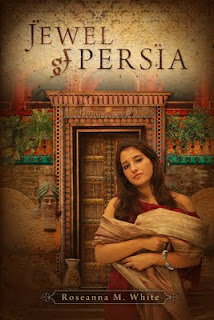 How can she love the king of kings without forsaking her Lord of lords?
Kasia grew up in a poor Jewish home with more siblings than luxuries. But when a chance encounter forces her to the palace of Xerxes, she becomes a concubine to the richest man in the world. She alone, of all Xerxes' wives, loves the man beneath the crown. She alone, of all his wives, holds the heart of the king of kings.
Traveling with Xerxes through Europe as he mounts a war against Greece, Kasia knows enemies surround her, but they’re not the Spartans or Athenians. The threat lies with those close to the king who hate her people. She determines to put her trust in Jehovah–even if it costs her her marriage.
Years of prayers are answered when Kasia's childhood friend arrives at the palace after the war, but even as she determines to see Esther crowned in place of the bloodthirsty former queen, she knows the true battle is far from over. How far will her enemies go to see her undone?
Combining the biblical account of Esther with Herodotus's Histories, Jewel of Persia is the story of a love that nearly destroys an empire . . . and the friendship that saves a nation.
CONGRATULATIONS JO! Winner of The Wedding Season by Louise Gouge
Be sure to leave your email address. Please check your junk mail on and the day after the drawing. I've had to redraw because of no responses. Subject box will have: winner of (book title). I'll email the winner and they'll have seven days to respond. If I don't hear back I'll draw another name. USA shipping only. Thanks so much and please stop back again! Drawing will be held Monday, July 4th.
Posted by Debbie Lynne Costello at 9:47 PM