Book Giveaway for Margaret Brownley's A VISION OF LUCY Thrills, mystery, suspense, romance: Margaret penned it all. Nothing wrong with this—except Margaret happened to be writing for the church newsletter. After making the church picnic read like a Grisham novel, her former pastor took her aside and said, "Maybe God's calling you to write fiction." So that’s what Margaret did. She now has more than 25 novels and novellas to her credit and has been published in 15 languages.  The first book in her Rocky Creek series A Lady Like Sarah was a 2010 Women of Faith selection, and Romance Writers of American RITA finalist.    She is currently at work on a new series for Thomas Nelson. Happily married to her real life hero, Margaret and her husband live in Southern California, and have three grown children.
Leave a comment to entered to win A Vision of Lucy by Margaret Brownley. This is a great book you don't want to miss reading. So if you don't win, I highly recommend you buy it. If you'd like to read my review, check out my May 20th blog post. Good Luck!

More Love and Laughter
in the Old West
From Bestselling Author
Margaret Brownley
Sage Advice from A VISION OF LUCY
The way to a man’s heart is through his stomach. For this reason a woman wishing to look appropriately domesticated for her Mail-order Bride photograph should wear an apron and wield a kitchen utensil (preferably not a rolling pin).
Say Cabbage
In 1850, Julia Shannon of San Francisco took the family portrait to new heights when she shockingly advertised herself as a daguerreotypist and midwife.  After reading about her I just had to write about a lady photographer.  Of course, the heroine of A Vision of Lucy doesn’t deliver babies but she still finds plenty of ways to get into trouble.
I loved writing about old time photography and have nothing but awe for the brave souls who first took camera in hand.  Not only did they contend with unwieldy equipment but also dangerous chemicals and exploding labs.
Women had an advantage over male photographers who were often confounded by female dress. This explains why one photographer advertised in 1861 for an assistant, “Who Understands the Hairdressing Business.”  Women also had a few tricks up their leg of mutton sleeves—or rather their skirts.  Elizabeth Withington invented a “dark thick dress skirt” to use as a developing tent when she traveled.
Those cheerless faces in early photographs were partly due to vices that held heads still for long periods of time. Photographers used all sorts of devices to hold a client’s interest.  One even had a trained monkey. Another photographer had a canary that sang on command.  Mechanical birds were a favorite gimmick and “Watch the birdie” became a familiar refrain in studios across the country.
Magazines and newspaper ran ample advice for posing.  An 1877 edition of The Chicago Inter-Ocean advised women with large mouths to say the word “Flip,” although one photographer preferred the word “Prunes.” If a small mouth was the problem the word “Cabbage” would make it appear larger.
Not everyone was enamored with cameras.  One dog owner put up a sign warning “photographers and other tramps to stay away” after his dog had an unfortunate run-in with a tripod.
Did photography have a bearing on the suffragette movement?  Indeed, it did, but it appeared to be more of a detriment than a help.  The photographs of militant suffragettes or women dressed in bloomers did more harm than good.
If you think America was tough on suffragettes, think again. The women’s rights movement was considered the biggest threat to the British Empire.  According to the National Archives the votes-for-women movement became the first "terrorist" organization subjected to secret surveillance photography in the world.
Photography has come a long way since those early daguerreotype days.  One can only imagine what the brave souls of yesteryear would think of today’s “aim and click” cameras.  Now days you can’t even drive down the street without having your picture taken. But as Lucy would say, Never leave the house unless you’re ready for your close up.
Speaking of photography, my publisher is running a “Vision of Funny” photograph contest with prizes.  To enter go to margaretbrownleybooks facebook page and click on “Contests” under the book image. I think you also have to do something silly like click the “like” button. (just be sure you do it with a smile.) Hurry, contest ends July 13th.
www.margaretbrownley.com 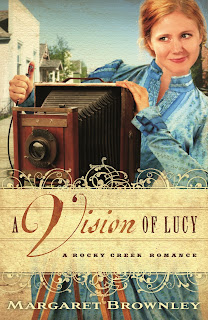 Trouble may follow Lucy wherever she goes, so does a vision of second chances.

Lucy Fairbanks dreams of working as a photographer at the Rocky Creek newspaper. If she can earn money making photographs, then maybe her father will see that what she does is worthy, more than just a distraction. And her deepest hope is that he’ll see her as an artist, the way he thought of her deceased mother, whose paintings still hung on their walls.
But trouble follows Lucy on every photo shoot: a mess of petticoats and ribbons, an accidental shooting, even a fire.

When Lucy meets David Wolf—a quiet, rustic man who lives on the outskirts of town—she thinks she can catch the attention of the town with his photograph. She doesn’t count on her feelings stirring whenever she’s near him.
Two things happen next that forever change the course of Lucy’s life. But will these events draw her closer to God or push her further away. And how will David accept this new version of Lucy?
Congratulations to Ann winner of The Inconvenient Marriage of Charlotte Beck by Kathleen Y'Barbo.
Be sure to leave your email address. Please check your junk mail on and the day after the drawing. I've had to redraw because of no responses. Subject box will have: winner of (book title). I'll email the winner and they'll have seven days to respond. If I don't hear back I'll draw another name. USA shipping only. Thanks so much and please stop back again! Drawing will be held Monday, July 11th.
Posted by Debbie Lynne Costello at 8:39 PM