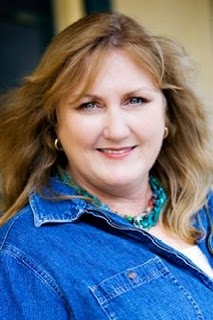 WELCOME KATHLEEN! I'M EXCITED TO HAVE YOU ON MY BLOG THIS WEEK!
RITA and Carol award nominee Kathleen Y’Barbo is the best-selling, award-winning author of more than forty novels, novellas, and young adult books. In all, more than one million copies of her books are currently in print in the US and abroad, and her books have been translated into Dutch, German, and Spanish, to name a few. A tenth-generation Texan, Kathleen Y’Barbo has a daughter and three grown sons. She recently married her own hero in combat boots and is proud to be a military wife, even if it did mean giving up her Texas drivers license.
Where are you right now (LVR, DR, Bathroom) and what are you wearing? You have to tell the truth.
I’m sitting on a stool at the center island in my kitchen. I’m wearing a bright pink t-shirt from the Junk Gypsys with the word “Fighter” on the front and the names of breast cancer survivors, including my sister Sue Bodden, on the back in white letters (all sales go to charity: http://www.gypsyville.com/store/store.asp?nProductID=25250). A pair of denim capris completes the ensemble.
Do you have a favorite author who inspired you?
I have so many! The longer I’m in this business, the longer the list grows. Know that the world of Christian writing is populated not only with brilliant authors, but with authors who sincerely want to come alongside other writers and help them succeed.
I have to give a big Amen to that, Kathleen. I have had so many help me along the way. And still are!
You write in several time period. What is your favorite to write in?
I’m going to give a grand, general answer and say the 19th century. I thought the 1830s were  very interesting when I wrote the Beloved series. Then I did another series set in the 1880s. Now I’m working on yet another series, also historical. However, at the same time, I’m also writing three contemporary novels set on a Texas beach.
How many books do you have published in all (including novellas)?
Book #40 releases this month, and so far I’m contracted to publish three more in 2012. God is good!
Wow! How awesome.
When you first started to write did you ever dream you would go this far?
I didn’t dare! Even when I got that first novella published, I figured that would be the culmination of my career. I was so sure of that, I put everyone I knew and loved into the dedication in case I didn’t get another chance to thank anyone! :)
Was the road to getting published a hard road or an easy one and was it what you expected?
Yes, yes and yes. Oh, and at the same time, no, no, and no. What I mean is, the road to publication is easy looking back but when you’re at the beginning of it, the distance to the goal can sometimes seem so far. I wrote a lot. Thousands of pages in the form of three 100,000 word novels that I shopped all over the place (and got rejected all over the place) before I sold, and when I sold it was an unfinished book that sold on a two-paragraph synopsis.
As for what I expected, wow...yes...and no...it was more.
If you could be any character in any literary book who would you be and why?
I want to be Flora Brimm, the heroine of the novel I’m working on now. I’m having such fun with her.
If you were to give your life a title what would that title be?
Never Saw That Coming...or something like that. God has certainly offered up a whole bunch of surprises in my life.
LOL! I love it!
If you could meet any person alive or dead who would that be and why? (excluding the Lord).
I’m going to cheat and say I would set up an in-person meeting between all four of my children. Putting four grown kids who live in three different countries (or will soon) in the same room at the same time is this mom’s dream. And I’m determined that it will happen again soon.
Awe, you deserve to cheat on that one! I pray it will happen for you.
What is your favorite material item that you own and why is it? (examples: ipod, Gone with the Wind book, grandmother’s rocking chair)
My wedding ring. It first belonged to my grandmother, who put 60+ years on it from the time she was my grandfather’s bride in the 1930s until her death in the 1990s. When I married Robert last October, I asked him he if would mind me wearing her gold and platinum band as a symbol of the lengthy marriage I hope we will have. Okay, so we’re a smidge over 50 and might not make 60 years of this. We’re still determined to try.

Thanks so much for being on my Blog, Kathleen. It's been fun! 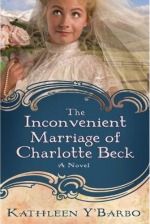 Charlotte Beck may be entering adulthood, but she can’t seem to keep to her stubborn, independent spirit from bucking social protocol. Fed up with her behavior, Charlotte’s father Daniel pressures her to settle into a nice marriage despite knowing she is set on going to college.
Then Daniel sees Charlotte with the handsome but annoying English astronomer Alex Hambly, and everything changes.
Though Alex and Charlotte can barely stand one another, Daniel offers them a deal they can’t refuse: if they agree to marry, he will save Alex’s family from financial ruin and grant Charlotte the freedom to go to college. Reluctantly the couple agrees, but in private they plot to annul the marriage as soon as possible.
But when Alex’s feelings change and he refuses to dissolve their contract, will Charlotte find a way out of her vows? Or will she discover that maybe this marriage isn’t so inconvenient after all?
Be sure to leave your email address. Please check your junk mail on and the day after the drawing. I've had to redraw because of no responses. Subject box will have: winner of (book title). I'll email the winner and they'll have seven days to respond. If I don't hear back I'll draw another name. USA shipping only. Thanks so much and please stop back again! Drawing will be held Monday, June 27th.
Posted by Debbie Lynne Costello at 7:09 PM