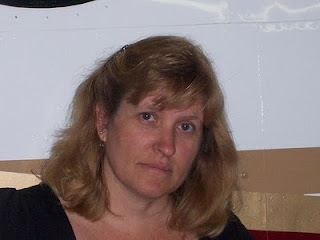 Tina Pinson resides in Grand Junction, Colorado with her husband of 29 years, Danny. They own and operate Omega Avionics. The Pinsons have three grown sons, two beautiful daughter-in-laws and 4 grand children.

Gifted with a vivid imagination at a young age, Tina started writing in elementary school. (it was that or get in trouble for lying). She has chosen several creative outlets; writing poetry, songs, or stories.

1) Where are you right now (LVR, DR, Bathroom) and what are you wearing? You have to tell the truth.

Ah Man! I knew I should have put on that new designer dress I bought. I'm sitting on my couch, drinking hot tea, English style (with cream), watching Fox News and wearing my flannel pajamas bottoms, they're red with white embroidered bears. To cap my ensemble, and show the fashionista side of me, I'm wearing an orange t-shirt with a big lobster on front. Oh and my hair isn't combed yet. All dressed up and nowhere to go

2) Who's your one biggest fan/supporter of your writing?

I have a few… Fellow writer and critique partner, Kathleen Maher, my sister's, (I have four), my mother, (my father was until he died), my friend, Lori Warren, my children, but my biggest fan would have to be my husband, Danny. Hands down. I've been at this for 20+ plus years, long enough to drive him to insanity. But he's listened to me whine, held me when I cried, didn't laugh when I danced (cause while I have rhythm, I'm sort of a klutz) and encouraged me to keep writing.

3) You’ve written several different time periods. Which is your favorite to write in?

I love the time period from 1850's to late 1880's. It encompasses the Civil War, Westward Expansion, Treaties and Wars with the Plains Indians. Gold and Silver rushes and more… so much happened in those few years alone. I'm part Cherokee and Scots Irish, so I'm pretty sympathetic to the plight of my ancestors.

4) With so many novels under your belt, when did you start writing and what made you start?

I started my first novel in elementary school. I have always loved words. And I've always had a great imagination. As a kid, I was constantly in trouble for my elaborate storytelling, maybe writing became a way to fabricate and do it without getting a spanking. But I really began to push more with my writing in my late twenty's after taking a break to have children. I wrote a little but when they were old enough to get in school, I had hours to get lost on my day trips.

5) I read the excerpt from In the Manor of a Ghost. It’s chilling. What kinds of emotions go through you when you are writing such a strong and heart wrenching scene?

I get lost in my scenes, I cry and get mad right along with my characters. My family has to laugh at times when I’m explaining what's going on and I'm so vested, I sound like my characters are real and I'm part of their world. Since I'm creating that world I suppose that's true in major way. Other times, when I'm in my character's head, my children have been known to sneak into my office area and see how long it takes to get my attention.

6) If you could meet any person dead or alive who would that be and why? (Excluding the Lord of course)

Just one when there are so many… Not fair. For a biblical person beyond Christ, I would love to meet the Apostle Paul. He may seem gruff in the scriptures, but he strikes me as so down to earth and honest, I'd be interested to hear what he had to say. And I would love to talk to Abraham Lincoln. Just to get his take on what happened in his life during his presidency and through the years of War. He seemed to have such wisdom and candor, such a heart for the nation he led. I would love to get inside his heart and head.

7) What is something that very few people know about you? I'm a grandmother, who's been married 30+ years to my high school sweetheart. And I love to sing, if I wasn't a writer, I had hoped to be the next Doris Day. 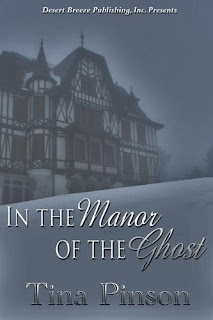 From In the Manor of the Ghost

The wagon raced down the road. It stopped right on her front step and was soon surrounded by a clamor of people. A chill snaking her skin, Kaitlin hiked her gown and broke into a run.

Kaitlin slipped past the barricades and pushed through the crowds. Heavy smoke made it hard to catch her breath. Nothing could stop her scream when she saw her apartment building engulfed in flames.

She scanned the lines of blackened faces. Her family wasn't there. Her gaze was drawn to the building, to the raging mingling of fire and life. Kaitlin prayed her family would come out. No one exited -- the agony of her thoughts cut her like a well-sharpened saber. Looking up, her thoughts became flesh.

Jean Marc stood in the upstairs window holding a bundle. Kaitlin knew, with another slice to her soul, the bundle was Simone. Jean Marc, so quiet, protective, so uneasily riled, yelled. Tormented wails for help rose along with tears of anguish and fear as angry flames licked out behind him.

The knife in Kaitlin's gut pushed through and slit her spine, filleting with cold precision. Pandemonium reigned around her where men held out their arms, coats, and blankets, and yelled for those Kaitlin loved to jump.

Across the space of the yard, over the din of bells, the cries of man and beast, over the conflagration -- eternity settling between them -- she caught her beloved's eyes. She couldn't read them. Perhaps she could, but couldn't bear to hear the message. Jump, she bade him. He remained at the third floor window, their daughter pressed to his chest. A sparkle of flame in his tear-filled eyes spoke of things to come and time froze. She closed her eyes for a brief moment to dam the tears and looked up to find him gone.

No one had jumped.

Spurred by inner wells of terror, Kaitlin raced for the doors. She groped for the handle, ignoring the pain. The timbers that secured the awning crashed, splinters of flame flickered like fireflies around her head, and fell to her skirts like droplets of orange rain. She stopped momentarily to brush her skirts and continued past the obstacle. Moving on, ignoring the rush of heat, she screamed for her husband, her child. Her legs ignited with heat, her lungs burned with the smell of seared flesh. She pushed on through the maze of lashing flames,ignoring the screams behind her.

Kaitlin was pulled to an abrupt stop before she could cross the threshold. She fought for release so she could join her family -- in death. She was dragged from the building, thrown to the ground and rolled into the dirt.

Afraid to look at the window and have her fears justified, she closed her eyes against the burning tears. Unaware, as she succumbed to the blackness, whether it was her voice she heard screaming so loudly, so pathetically, or the haunting cries of her husband and child,calling for salvation.

You can find me on the web at:

Purchase my book at:

****If you purchase the book at Amazon, please be aware that the ebook is the new release, the print book is one that self printed a few years ago and needed a lot of editing. I've asked them to remove it, but… they won't.

In honor of the release of In the Manor of the Ghost, I am running the contest … Win a Kindle… Catch a Ghost… for the entire month of June 2010. Check out my blog for the particulars.